Talked to eric a lot last night. It’s so tough, I really miss him but I know that I need to let go a littlle bit, at least while I am here. I really need this time to spend for myself, so that I can figure out what I want to do with my life and where I want to be. It ‘s not that I’m looking for a relationship with anyone, or that I’m trying to replace him. I really don’t want to get involved emotionally with anyone here, four months is too short a time to spend it worrying about guys and relationships. And i I told him that. I hope he understand what I mean.

I went to some hostels today and looked up prices. I think I need to reserve the hostel for him a head of time for semana santa because that’s a busy time for granada. I also found some places that we can go, like a little hiking trail up to the alhambra and all that jazz. Last night I talked with a older columbian astronomer, who told me that “no debes llevar lleno al monaña” which means sometihng like you shouldn’t bring wood to the mountain. He explained to me that I am young and I need to be free, not just in spain, but for as long as I need to be free. He kept saying that life is full of surprises “la vida tiene surpresas, que sorpresas tiene la vida!” or something like that. He was a strange guy, he looked like a crazy professor with john lennon glasses and a tweed blazer. Talking to him made me feel a little unsure about things, but in a way it made me feel better too.

Laney says that this isn’t the real world, that the real world for her is back in the states and that granada is her alternate universe. And although sometimes it does feel like an alternate universe, I don’t agree with her that this is not real life. Of course it is real. It’s as real as life in the states at least. But lately I’ve been getting these feelings of waking up from a dream. Like suddenly I wake up and I realize ‘this is it, this is my life. I’ll never be here right now doing this right now again’ At first it was very scary. Like I am not doing enough. It used to fill me with a sense of urgency and the need to cling to every moemnt. But lately I’ve been embracing it, meditating on it and letting the feeling just be there and I’ve realized that my problem isn’t that I’m dreaming all the time. It’s that I’m trying too hard to hodl on to the current moment. If I just let the moment be, just acknowledge it, cherish it and then let it go, it is so much more valuable that way. It’s differnet than doing what people call “living for the moment” because it’s not hasty and not random. It’s not thrill seeking. Its not seeking anything. It’s just accepting this moment, this second for exactly what it is: temporary, wonderful but at the same time nothing special.

I hiked around the albayzin today with Amanda. I really like her because I feel like I can practice my spanish with her and she doesn’t judge me if I can’t remember a word. she just lets me think about it and then if I still cant remember she tells me to describe it using other words. Which is difficult if the word is an abstract nown. But it all seems to work out in the end. I like amanda because she is very independent, and at the same time I think she understands where I’m coming from, and what I’m trying to accomplish while I’m here. I hope to spend more time with her.

met up with the psychologist from america today. It’s crazy but I feel like she and I are connected in a strange way. We talked a little bit about culture shock, about the thought processes behind what causes culture shock. When you go into a new environment, you take a piece of your home with you. And so when you are put in a strange situation that is so different from what you are used to, it triggers angry thoughts, which change your behaviour, which change your brain chemistry (because when you move, neurons fire in your brain, creating an associative pathway so that it will automatically happen every time you are in that situation/) and so quite literally it is a rut you can’t ge tout of. Unless you can remove yourself from your thoughts, observe them and then change your behaviour. And so you do this by examining your exact thoughts in those situations. I think I want ot do my thesis on this mehtod of coping with culture shock. I’d like to have the subjects fill out journals while they are in a different country for the first couple of weeks. Apparently, the thoughts come in patterns and so those patterns are actually what makes our psychological culture. Which makes culture shock. I’m also interested in reentry shock, and would like to do the same thought survey on people coming back from forgein countries. I think I might email my advisor and see what she says about these ideas.

I took the placement exam today and found out that I got into the C program so my schedule will be a little bit different. But no pasa nada. Hopefully hamilton will still accept the credits. I just emailed my advisor and asked her to forward it to the registrar’s office because I couldn’t remember the name of the person I was supposed to send it to. Hopefully the credits will transfer. If not I guess an extra year at hamilton won’t hurt! 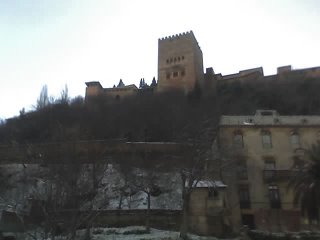 Walked around the albyzin today and the arab markets with Laura, Julie and Laura’s new roommate. We walked all around sacramonte and saw gypsies playing music. Took lots of pictures of the alhambra too.bought earrings from a nice guy at the arab markets who asked me where in the states we were from. Were home by 2 for lunch. Went to a teteria with laney, sarah and mateo. Stopped by another apartment and picekd up Oscar. Mateo might move in there. We hoisted a couch up onto the roof of their house today, the first time the rope snapped but the second time we tried it it worked out fine. We left for the teteria at around 9pm. Mateo and I split a crepe and drank darjeeling tea. Sara left to go salsa dancing. Mateo, oscar, laney and I invited the musicians from the teteria back to laney’s house for dinner. We went grocery shopping and bought pasta andv vegetales. We went back to her house and cooked up a wonderufl feast of pasta and vegetables. Her neighbors came over who are professional flamenco guitarrists and played/sang for us till 1am. We drank wine and ate our food and chatted and listened to them play music. It was all wonderful. Then the musicians from the teteria came over and we ate more and drank more and sang bob marely songs and improvised and it was beautiful. There are times in my life, times which are increasing, where i absolutely cannot believe I am living. And then I relax and it just flows through me. Life is just full of these moments where we need to stop and absorb, to just let go and take in all that is around us, to accept that it is fleeting and live all that we can. I walked home with laney and the musicians half way. Then I walked the rest of the way by myself amongst drunken musicians, students and poets. No cars in sight. It was just us and the stars.

Walked around the arab markets with Julie and Laura. I wanted to show them Laney’s house for sunset tea. One of the shopkeepers whistled at me, and I turned around, not because he whistled but because Laura and julie were lagging behind and I wanted to make sure everything was ok. So of couse he thought I was acknoweldging him. But he started talking to me and asked me if I had ever been to the teteria next to his shop. I said no, that I was going to a friends house and he said thatt was nice and that he would see me later. I grabbed Laura and Julie and we left for Laney’s house. Tea at Laney’s was really relaxing. We watched the sunset over the city, the mountains our only witness and one of her flamenco neighbors with a camera and a guitar as his weapons. The sun raced to set in a matter of seconds and w e were left with the stars and dusk’s light to find our way home through the narrow wet streets of the arab quarter of granada.

Went to a tapas bar, wasn’t really impressed with it. Had sangria and patatas fritas. But the conversation was nice. Walked alone to plaza nueva in the dark and rain, a little scared but no pasa nada. Met Laney and Sara and walked through darken wet streets full of hippies and saints to a teteria which smelled pleasently like incense and was very hot. Drank an infusion of mint and orange blossom tea (infusion del invierno) and listened to argentienians play sitar and some sort of drum music. Left smelling like incense and tea. Walked aroudn a bit with laney and went to the apartment of the musicians where they offered us tea and cookies. Had a great conversation about buddhism with the sitar player: life goes in an upward spiral, every experience brings you toa point. It may be a high point or a low point but you keep traveling upwards, never at the same point. He said he didn’t know much about particular buddhisms but felt that the general philosophy was important and beautiful. Was a little shy and didn’t say much. It was great just to sit and listen and sip my tea and every one ina while chime in. although I would have liked to really engange in conversation, estoy un poco timida y pues, no puedo hablar con ellos. Pero no pasa nada. They seemed really nice and I just had such a nice vibe in their company. Although I feel like maybe I watch too much. Need to stop spectating and start exploring. I’m going to the travel agency tomorrow to figure out if I want to go to the canary islands with mis amigas. Pienso que si pero tengo dudas. They have different goals than I do. I’m not really a big fan of the beach or doing the typical touristy vacation thing, but I thinnk I need to just do it and have an adventure. I need to meet people and if they aren’t spanish , it’s not a problem because people are all connected with eachother in such strange ways. Like a friend of a friend has a castle in portugal and would you like to come with me? Pienso que si